All instructors at St. Petersburg Yoga have been trained through our Yoga Training programs, and are certified with the Yoga Alliance. In addition to teaching group classes, most of our instructors are also available for private one-on-one sessions.

Have you fallen in love with what Yoga has done for your mind/body/life, and want to help facilitate others on their journey? St Petersburg Yoga offers 200 and 500 hour Yoga Alliance certified teacher training programs. 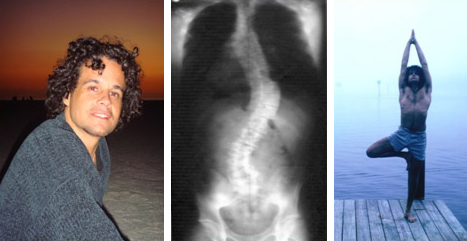 As the founder of St. Petersburg Yoga, Chris Acosta began a daily practice almost 30 years ago while in a full body brace (for 4 years and 23 hours a day) to first heal his extreme scoliosis. The degree of scoliosis consisted of two curvatures with the largest at almost 50 degrees, multiple herniated discs, pinched nerves and spinal arthritis. Freed from the severe pain, deformation of the body, and armed with these successes, he focused on the greater liberations in which Yoga was originally designed.

Due to his hands on experience, Chris has become one of the area’s most admired and prolific instructors. He was showcased in, “Best [Yoga Instructor] of the Tampa Bay” by DuPont Registries (July 2007) and is known as a teacher’s teacher. He has taught tens of thousands of classes over his career. Although Chris primarily instructs one-on-one, he also teaches a large number of group classes, corporate classes, workshops, lectures, retreats and is the primary instructor of St. Petersburg Yoga’s 200 and 500 level certifications offered in the Yoga Teacher Training Programs.

Chris aspires to demonstrate the true power of authentic Yoga and the amazing abilities it has to transform any area that binds and limits, from the pain and handicaps of the body to the mental traps that cause seemingly inescapable cycles of suffering. He holds an E-RYT 500 educator level certification from Yoga Alliance and is also honored to be a part of the distinguished faculty at the Omega Institute in New York.

Known for developing Yoga Traction Therapy, Chris instructs from many influences: Iyengar, Therapeutic, Restorative, Ashtanga, Power, Vinyasa, Pranayama, Mantra, Meditation, Yoga Philosophy, Yoga Sutras, Upanishads and the Bhagavad-Gita. He specializes with the injured and very beginner to the intermediate and most advanced students. 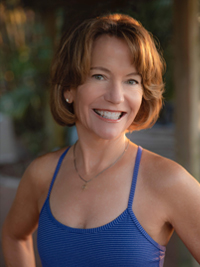 Know your body…Observe your mind.

When Jill first stepped onto the mat over 15 years ago she knew she had discovered something special. After a few months of practice, she realized yoga would be a lifetime journey for her. As a triathlete and distance runner, she saw the value in the softer side of movement, knowing it would bring balance, strength, flexibility and mental focus to her busy life.

Her Classic Fundamentals classes mix a blend of stress-relieving breath work, energizing strong postures and tension releasing flexibility postures. Her Power Swing classes incorporate traction therapy and creative use of the yoga swing for building core strength and harnessing the benefits of hanging upside down in full inversion.

As an active triathlete, she also works with endurance athletes, teaching the benefits of muscular balance: muscles strong enough to do the action and long enough to cover the distance faster, without injury. 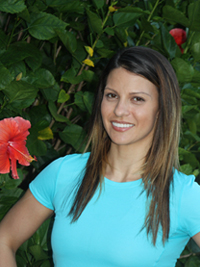 Coming into Yoga with physical pain from scoliosis and a hard-pushing lifestyle, Heather quickly began taking the advice of her teachers and started applying what she was learning in the classroom to the bigger classroom of her life. Though difficult, she couldn’t help noticing the same transformative effects happening in her body and her life.

Like so many of us today, Heather found herself overwhelmed in a high-stress life of perfectionism and self-bullying, spurring a process of anxiety and depression.

In contrast to this physical and mental drain, authentic yoga directed her towards balance and the peace that organically arises in its place.

Heather teaches a variety of classes, all of which you can expect an accessible approach that both helps and inspires anyone to meet themselves where they are and encourage growth. 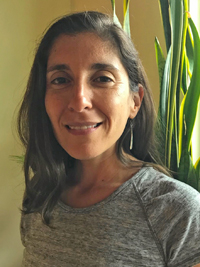 Ligia has worked in social work and public health for the past 17 years. Her approach to serving others has always been a holistic one, aiming to address both the challenges and potentials of body, mind and life.

She first started exploring yoga in response to high levels of stress, perfectionism, over-extending and related gastrointestinal issues – all of which were impacting her ability to do the work she loves and nurture the relationships that are important to her.

Years of practicing yoga with a narrow focus on only the physical aspect led to transient relief without any lasting transformation. With the guidance of her Yogi teachers, Ligia has started the journey towards identifying unhealthy patterns of behavior, honoring her limits and cultivating balance in all aspects of her life.

Ligia strives to encourage curiosity in her teaching, empowering students to identify their own imbalances and explore their paths towards growth and realizing full potential. 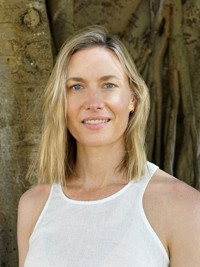 Whitney is an RYT-500 Yoga Therapist and Mom. The loss of her brother, along with the demanding lifestyle of being an elite athlete and businesswomen, created pain. Yoga gave her the tools to heal, slow down, and connect with her inner guide. Through the Classic Fundamentals classes and Workshops, Whitney teaches the Yoga breath, meditation, and mindfulness practices that helped her transform the body, brain and life issues underlying her pain.

Her Classic Fundamentals class is designed for self exploration and opening up to the present moment. Physically, you can expect 50% strength and 50% stretch postures in her classes; good for muscle toning, joint integrity and overall flexibility. You will expand and shape the breath, in turn shaping the mind. 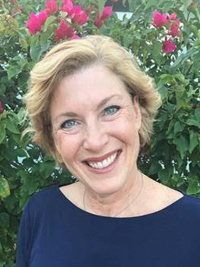 Christi is a current Yoga Therapist finishing up her Yogi Training, Registered Nurse, and Mom. She experienced the powerful impact that full spectrum Yoga and all its mind, body, life and spirit tools can have on the human condition.

Christi teaches the Classic Fundamentals styles. This class is designed around 50 % strength and 50% stretch postures. You can expect her classes to be a mix of traditional standing postures, dynamic movements along with some long hold release postures. It draws on many different styles like Iyengar, Sivananda, Kripalu… 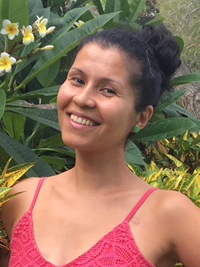 Chemen is a native of Turkmenistan, a small country in central Asia. She is a concert pianist, wife, mother of a teenage son and fluent in five languages.

After being diagnosed with breast cancer, Chemen underwent a full year of treatment. The emotional and physical stress, as well as the neurological side effects of chemotherapy, lead Chemen to begin her journey at St. Petersburg Yoga.  Her experience proved to be life-changing. Yoga lifted her spirits, playing a huge part in her physical and mental recuperation, creating a renewed outlook on life. A year later, she “feels stronger, more energetic and happier than ever”.

Chemen teaches many different styles depending on what is most balancing for the student. She specifically uses an approach to Yoga that encourages her students to meet themselves where they are and find their edge in body, brain and life practices. 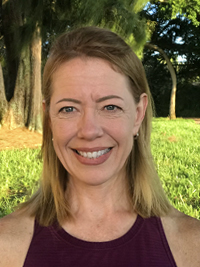 Jenny instructs children and adults of all ages, in addition to students with disabilities. She guides everyone through a mix of brain, body and life practices that meet each person exactly where they are as well as encouraging growth.

Jenny turned to yoga following years of body pain and chronic anxiety. Then, after observing how yoga helped her disabled daughter find ease through an intensive surgery and recovery, Jenny decided to pursue yogi training.

Jenny’s Classic Fundamentals class is a balancing mix of strength and stretch, with an emphasis on using mindful breath and movement to manage anxiety and stress. In order to maximize their practice, Jenny teaches her students to carry these mindfulness tools off of the mat and into their daily lives. 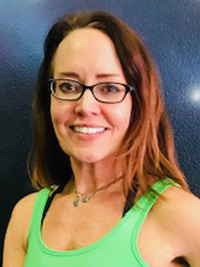 Tracy is a Mother of four (sometimes more), foster parent and wife of a retired active-duty military soldier. She is also a twenty-plus year certified fitness instructor with a BA in Dance Education.

When she began her journey at St Petersburg Yoga, Tracy had severe paralysis in her right arm due to spinal compression, plus her chaotic life raising four-plus boys left her feeling anxious and highly reactive.

Tracy did know however, that all of the answers resided within her. The practice and principles of authentic Yoga had brought her to center. Coming from and transforming these body, mind and life issues is how Tracy challenges herself as a teacher.  Coming into her classes, you can expect a real, practical and pragmatic style of teaching aimed at making real changes in our lives. 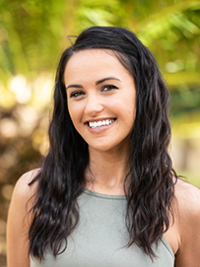 Daniele is a licensed massage therapist and registered yoga teacher as well as a speaker and educator at the Aveda Institute. Her career is devoted to helping others, when they are ready… towards whole body, mind and life wellness.

She came to the larger whole/full system of Yoga looking to change some big challenges in her mind, body and life. Daniele was struggling with anxiety, PTSD, compulsivity, impulsivity and cervical neck issues plus severe musculoskeletal stiffness. Guided by her Yogi teachers, she was pointed to and has disciplined herself in balancing practices for her issues. Though it is always difficult to do the things that have the most growth for us, over time Daniele witnessed first-hand the real power of doing the right practices.

You can expect Daniele’s classes to emphasize the foundational practices of evaluating for balance (not just in the body); starting anew each time we practice; and how to evaluate the right depth for a given individual.

As a practitioner as well as a teacher of yoga, Nan approaches this system as a way to free up the human condition. Practicing and teaching authentically, much of what she has worked on involves discovering and then changing the underlying drivers of suffering.

Nan’s students are typically looking for ways to move on from emotional, mental and/or physical pain.  Whether it’s the go-go-go personality, over-stress, anxiety, hip/back issues or neck and shoulders, you can expect her classes to go right to the most direct practices to effect transformation. Nan uses an even mix of yoga’s brain, breath and body practices. 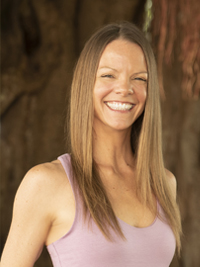 Stephanie has been a student of the body and brain for her adult life. Motivated by musculoskeletal issues like spinal scoliosis, she tried many modalities to overcome these body challenges and move towards wellness.

Just as most of us discover, treating the brain proves to be even more challenging. Armed with some early successes in Yoga, Stephanie began working to transform dispositions like addiction, compulsivity, anxiety and depression.

Stephanie has learned so much about herself through her academic and broad use of therapies, but the deeper dive into the self-practices of brain, life and body Yoga have been the most liberating. This is what you can expect in her yoga teachings.

Stephanie is currently teaching both restorative-therapeutic and strengthen-flow styles of yoga.